A New Era Of Work In The Middle East And North Africa: What Is To Be Done?

Imagine this prosperous future for the Middle East and North Africa: innovation and technology permeate dynamic markets, society flourishes with the economic inclusion of youth, women and the less fortunate, and economies capitalize on the massive investments made during the past few decades.

For Arab Spring protestors, these dreams were as much in play as the political ones that dominated international news cycles in 2011. Just as poor governance and inadequate service provision fomented unrest, so did income inequality, a shortage of quality, formal sector jobs and limited prospects for the region’s youth. And just as political change throughout the Middle East and North Africa has been underwhelming, the region still has much that needs fixing when it comes to its economies.

The World Bank’s forthcoming flagship report, ‘Economic transformation for jobs: Reaping the economic dividend of youth and women in MENA,’ sets out a bold vision of a prosperous future for the region like the one above. We think it’s achievable. But what will it take to get there?

In short, no one thing. A flourishing future for MENA will require an integrated approach of macro and micro interventions to address the many challenges that have so far kept the region economically depressed and slow to change.

Slow to change, slow to grow

For all the efforts to develop MENA economies, the region remains plagued by a slow pace of technological change and a lack of opportunity for meaningful work. For more than 25 years, youth unemployment rates in MENA have been the highest in the world, reaching 26 percent in 2018. University graduates make up a significant proportion, with many of them suffering from long-term unemployment. Many women do not participate in the workforce at all (figure 1). 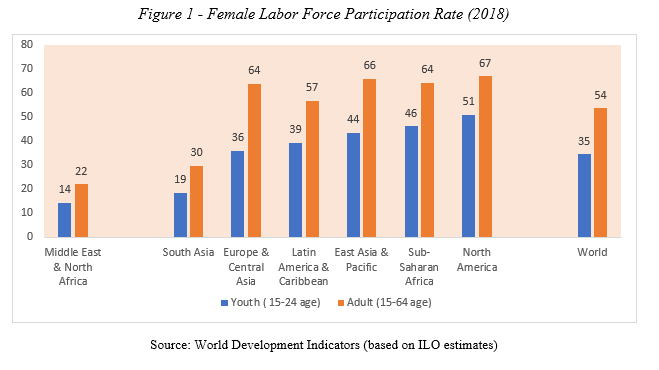 Many countries in the MENA region suffer from oversized public sectors that have become the primary employer. The region has the highest central government wage bill in the world: nearly 10 percent of GDP compared to a global average of 5.4 percent.

The pace of job creation for new labor market entrants in other sectors is too slow, and often not geared toward high productivity jobs. Many turn to informal work instead; more than three-quarters of young employed people work without written contracts in places like Egypt, Jordan, Lebanon, Tunisia, and West Bank and Gaza.

In the next 20 years about 300 million young workers in MENA will join the labor force, aspiring to decent work and decent income. But if nothing changes, the potential demographic dividend that large, young populations can provide countries will be squandered.

Changing course in MENA will require an integrated approach of macro and micro interventions. Governments in this region ought to anchor their reforms around three main goals: job creation, modernization, and wide social inclusion.

It won’t be easy. MENA countries will need to lower the barriers to its markets in the face of stringent regulations and high social insurance that make workforce adjustments costly. But if they do, more workers—and more women—will be able to join the workforce or shift into higher-productivity work.

Countries in the region will have to create more contestable markets, where firms have no barriers to entry or exit. To do this, they’ll have to rethink low-competition and policies that erect barriers for entrepreneurs. If they succeed, their economies will efficiently allocate resources, encourage higher productivity among firms and workers, and lead to wage increases and eventually economic development.

MENA countries will also need to embrace technology that has already swept across most of the globe: digital platforms that lower transaction costs for businesses in underdeveloped areas and create jobs in new and existing sectors. Amazon, for example, estimates that nearly 10,000 data scientists may be needed for the cloud industry in the Middle East. 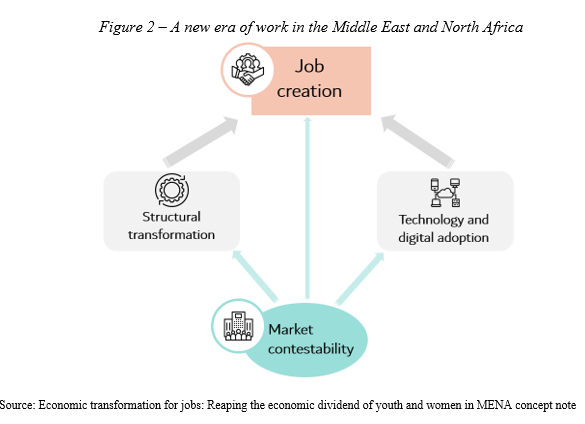 MENA countries can achieve economic prosperity if they push themselves into a higher equilibrium, anchoring change on contestable markets, vast technology adoption and, most importantly, inclusive job creation (figure 2). We’ll be using these guideposts as the foundation for the World Bank’s forthcoming flagship report, ‘Economic transformation for jobs: Reaping the economic dividend of youth and women in MENA’.

The flagship report is jointly produced by the Office of the Chief Economist for MENA and the Jobs Group in the Social Protection and Jobs Global Practice.