Here’s what could help lift rural Hondurans out of poverty 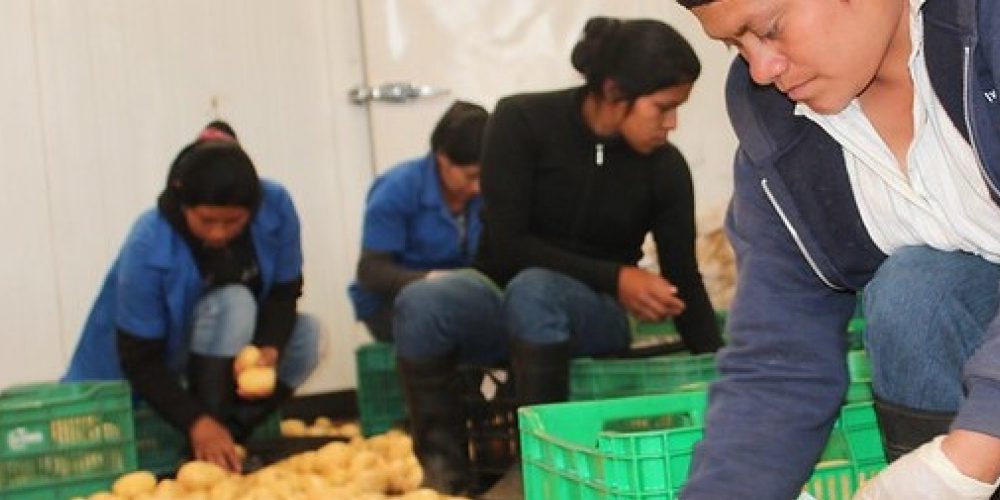 In Honduras, as in other Latin American countries, increased labor incomes have been central to reducing poverty. However, many are still under-employed, so households have the potential to earn more. This calls for increased attention on ways to increase labor intensity, instead of focusing only on increasing the productivity of specific job types.

Our Honduras Jobs Diagnostic found that rural homes are especially affected by under-employment, but there is considerable variance. We analyzed households’ labor intensity (the share of their members that work) and their diversification across types of jobs. We reached four conclusions that could help policymakers address rural poverty in Honduras.

Conclusion #1: Rural households underutilize their labor resourcesUnfortunately, most rural homes are still underutilizing their labor.  Less than a third of families use over three quarters of their available labor supply. This could reflect the lack of job opportunities; or the fact that activities such as family care sometimes take precedence. Either way, to reduce poverty rates, it’s crucial to create conditions where more working-age people can get paying jobs.

That’s especially important for women. Only 40 percent of rural women are active in the workforce, compared to 90 percent of men (Figure 1). This striking gender gap is double that observed in urban areas. It may be because there are few rural job opportunities outside of agriculture, where most jobs are held by men. But it could also reflect greater cultural bias in rural areas against women working outside the home.

Conclusion #2: Higher labor intensity increases incomes and reduces poverty. When the proportion of adults who work increases, rural incomes rise strongly and poverty falls. In rural households where less than a quarter of working-age members have paid work, monthly per-capita earnings average around L.1,100 (US$ 44). That’s well below the moderate poverty line of L.1,618 (US$ 67). But raising the share of adults who work into the range of 25 to 49 percent increases average earnings to L.1,755 (US$ 71), comfortably above the poverty line. When over half of the adults are working, average earnings reach L.2,600 ($105); and when over 75 percent work, they reach L.4,140 (US$ 166) (Figure 2).

Conclusion #3: Combining non-farm jobs and formal wage jobs is the highest-paying option for a rural household. 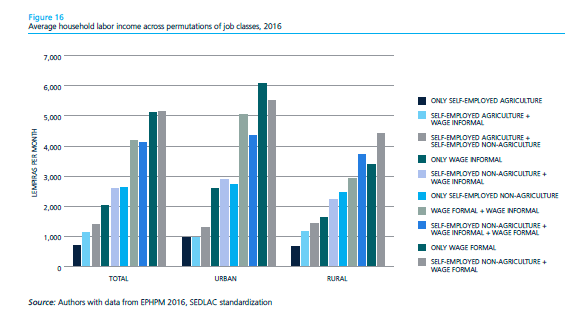 Households whose employed members all work in the same type of job tend to use less of their labor supply. For example, households comprised entirely of farmers use just 39 percent of their potential labor. Likewise, households comprised only of formal wage earners use only 49 percent (Figure 3). In contrast, the combination of non-farm self‑employment with wage work (formal or informal) is associated with labor utilization rates above 75 percent. This could be due to job characteristics, such as flexible working hours, which may facilitate increased labor force participation, especially of women. So, the availability of diverse job types helps households to use more of their labor. That’s why policy makers should focus on diversifying job types to intensify the utilization of rural labor; and not just on increasing the productivity of any single class of job. 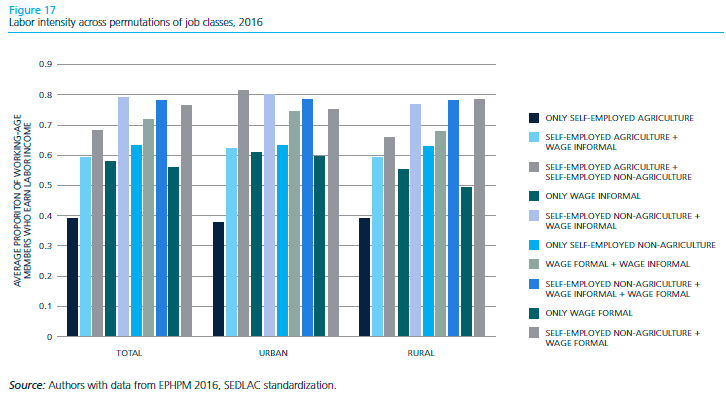 Note: This blog is based on the Honduras Job Diagnostic (February 2020), a report on the status of the job market in Honduras prior to the COVID-19 pandemic. 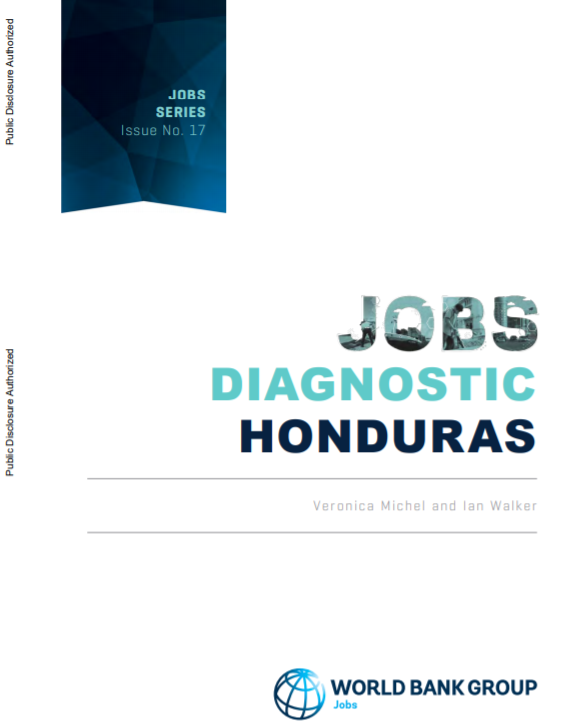