My Mom Hired a Female Driver! The Economics of Employment Sex-Segregation

Having a driver may seem like a luxury reserved for the ultra-rich in the U.S., but in Bangkok, it is an affordable necessity for aging middle-class people. My parents’ recent decision to hire a driver is a typical one for that city: My mom is 75 and my dad is 80, so it allows them to maintain independence and mobility, not to mention keep up their social lives. What’s much less common is that my mom chose a female driver, Yaa.

Driving is one of the most sex-segregated occupations in the world, with men making up 96 percent of commercial drivers according to data from the ILO. And it is just one of many types of employment that are heavily skewed toward one sex or the other.

Our new working paper, Gender-Based Employment Segregation : Understanding Causes and Policy Interventions, draws on the latest data to show that employment sex-segregation remains rampant. And it happens in two broad dimensions. Working women are often concentrated in different sectors, industries, and occupations than men (this is called “horizontal segregation”). And within firms or occupations, women are concentrated in lower positions or promoted at lower rates (called “vertical segregation”).

Globally, working women are more likely to work in low-productivity industries like retail, health, social work, and education. But there is no one global pattern. An occupation heavily skewed toward men in one economy may be gender-balanced elsewhere. For example, the share of women in teaching ranges from just 22 percent in Tanzania to 87 percent in Latvia. 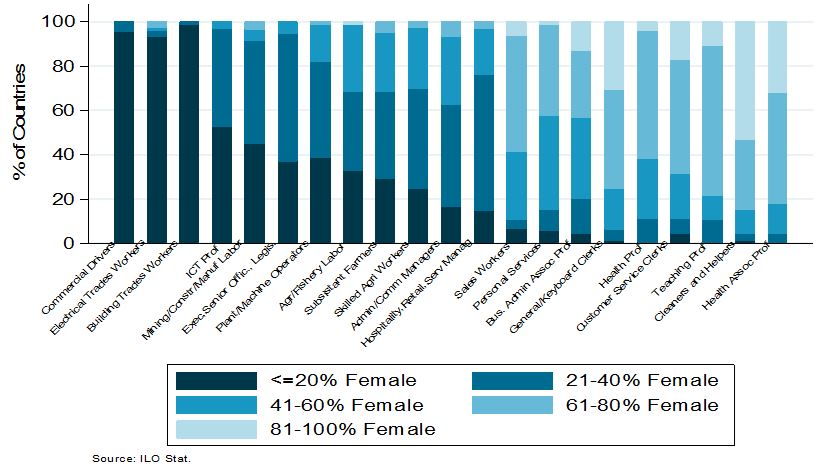 The chart above shows the magnitude of sex segregation in various occupations for 80 countries for which we have data. As you can see, commercial driving is one of the most sex-segregated occupations in the world. But other occupations are not doing so well either: Information Communications Technology, a booming occupation, employs mostly men. Low-paid roles including cleaners and nursing assistants are held mainly by women.

Those statistics translate to real effects. Exclusion from higher-paying occupations limits women’s economic opportunities and, consequentially, a country’s economic growth. A higher concentration of women in low-wage jobs results in an inefficient use of human capital. Additionally, limited female participation in leadership and managerial roles stymies the innovation and growth that can arise from diversity.

So, why does employment sex segregation still exist?

To bust one myth, it is not a consequence of educational disparities. In most countries, women are pretty much on par with men in terms of educational achievement. Instead, the problem stems from a multitude of reasons that can be grouped into three buckets:

Labor demand
Employers’ biases, toxic or unwelcoming workplace cultures, and a lack of promotion opportunities can keep women on the low-earning end of the job spectrum.

Legal and policy environments
Restrictions persist in more countries than you might expect. In Argentina, for example, women are prohibited from making alcoholic beverages or cleaning machinery, and in France, women are restricted from carrying loads greater than 25 kilograms. According to Women, Business and the Law, 100 economies stop women from doing the same tasks as men.

Our working paper discusses potential solutions. While prescriptions are dependent on local contexts, government policies are most effective when they strategically address the supply-side and demand-side constraints.

Gender norms cut across all of these factors. Like my mom, many people grew up seeing only one gender perform a particular task like commercial driving. Unfortunately, this leads to the belief that only men can be drivers.

But my mom’s story shows these beliefs can be overturned. When she came across a female candidate named Yaa in her search for a driver, the idea was initially unfamiliar. She thought about her many female friends who enjoyed taking road trips in their youth, did a bit of soul searching, and realized that anyone—male or female—can be a good driver.

What’s more, after interviewing Yaa, my mom found out that she used to work in the food business. Since my mom likes to make Thai desserts to sell, she realized Yaa could help her go to markets and pick up ingredients—skills her previous male drivers didn’t have.