#2 Most People in Most Countries Work in Farming and Services, not in Factories 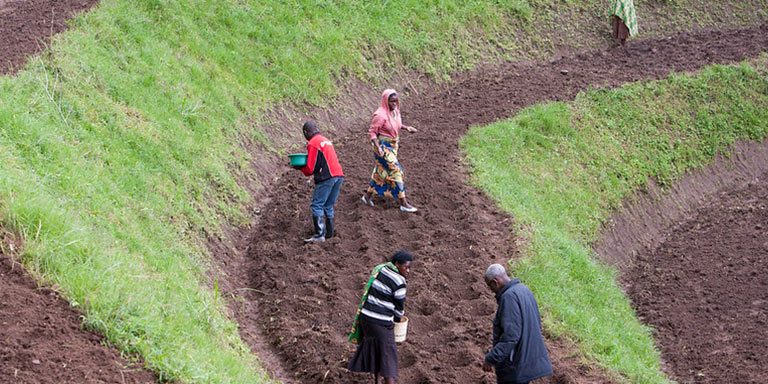 Data on employment shares by sector show the rising importance of service jobs as countries get richer – and a corresponding decline in the share of agriculture jobs. Manufacturing, in contrast, plays a much less important part in the shift to higher incomes and it rarely accounts for more than one-fifth of all jobs in an economy.

Structural transformation is about changes to the structure of consumption, production and employment. Studies of economic structure and employment date back to Clark (1940), Kuznets (1957), Chenery (1960) and Chenery and Syrquin (1975). Their central thesis, revisited by McMillan and Rodrik (2014), is that economic growth requires ‘structural change’, defined as a shift in resource allocation in the economy from primary to secondary and tertiary activities.

In this blog we look at the structure of employment in countries at different levels of per capita GDP. Kuznets noted that the pattern of structural change over time “is remarkably consistent” with the pattern found from using a cross-section of countries by GDP per capita. Here, we combine these approaches, by taking the per capita GDP in constant $US2010 and shares of employment by sector for 640 observations across 103 countries at all points in time where the World Bank has collected micro data between 1991 and the present. 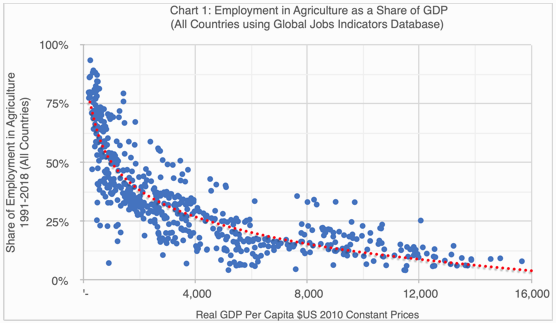 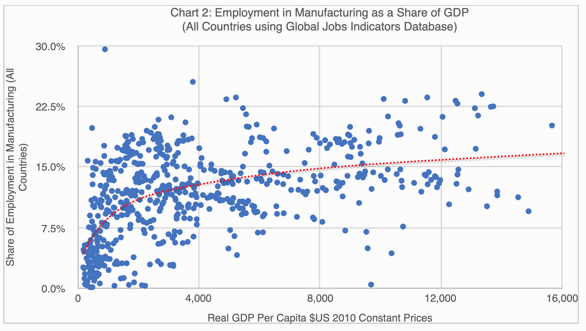 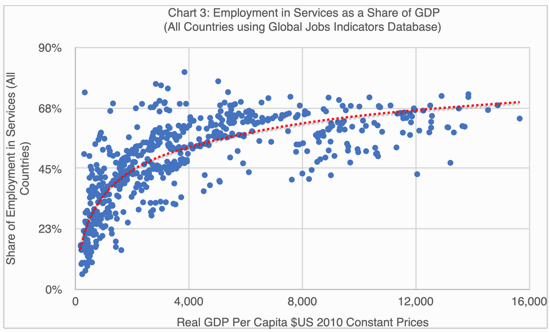 These findings imply that, when workers are not employed in agriculture, they tend to work in services. Chart 4 suggests this correlation is strong, yielding a correlation coefficient, r of 0.96.

These simple observations also imply the probability of an underlying causal relationship. In a subsequent blog, we look at episodes of growth and economic transformation to check if there is a link between growth in agricultural productivity and the rate of growth in service employment in low and lower middle-income countries. Then, we will follow Kuznets’ hunch and Baumol’s related theory of “cost disease” to explain why, in richer countries, so many people work in services.