In this blog, we explore how the challenges of delivering better jobs through structural change differ depending on where a country is in its demographic transition. We draw implications for jobs strategies in youthful countries.

When developing countries enter the demographic transition the share of youth in the working age population increases. Youth are typically better educated than the older members of the labor force. But being better educated doesn’t of itself make them more productive. First, learning happens on the job, putting a premium on experience, which young workers will only get in time, if the economy creates enough opportunities for them. Second, to be productive and enhance their earnings at work, young, smarter workers also need equipping with enough capital (eg machinery and equipment). There is insufficient capital in most youthful developing countries, so youthful developing countries, especially pre-dividend countries must make a special effort to accelerate capital formation so that they can equip new labor force entrants adequately, and deepen capital for the labor force as a whole.

India for example, one of the fastest growing economies in the world, quadrupled its capital labor ratio between 1991 and 2017, and more than tripled labor productivity. Of the fast-growing countries mentioned in blog #10, Bangladesh, Sri Lanka, Panama, Dominican Republic, Korean Rep. Mauritius and Mozambique all more than tripled the capital/labor ratio over the period 1991-2017, even though they were all youthful economies, entering their demographic transition. On average, these countries increased labor productivity by a factor of 2.6 during that period. But in other youthful countries, such as Gabon, Congo Rep. Togo, Cameroon, Eswatini, and Jordan, where the capital/labor ratio fell between 1991-2017, average labor productivity increased by only 4 percent in 26 years. For Gabon average labor productivity fell by 17 percent and the capital labor ratio fell 11 percent.

Low-Income Countries (LICs) and Lower-Middle Income Countries (LMICs) are younger than Upper-Middle Income (UMIC) and High-Income Economies (HIE). The structural patterns we observed in earlier blogs therefore apply when considering youthfulness. We showed in blog #4 that structural change drives growth in labor productivity in LICs and LMICs. With most workers in LICs and LMICs working on farms (blog #2), youthfulness increases the importance of creating more off-farm waged jobs, and preparing younger workers for them. We show in blog #10 that factor accumulation and structural change are key drivers of economic growth in the faster-growing LICs and LMICs. When we categorize countries both by income group and by the stage of demographic dividend the country is at, the evidence suggests structural change is slower in the more youthful countries within income groups.

Chart 1 presents the share of people under 24 years old by demographic groups, categorized according to where the country stands in attaining a `demographic dividend’. Since the mid-1970s, those countries classified today as early, late and post demographic dividend were aging. But those countries classified as pre-dividend were getting younger on average up until the mid-2000s. Increased youth dependency means youthful countries face steeper challenges with nutrition, maternal child health, and education. The accumulation of human capital is harder to achieve. 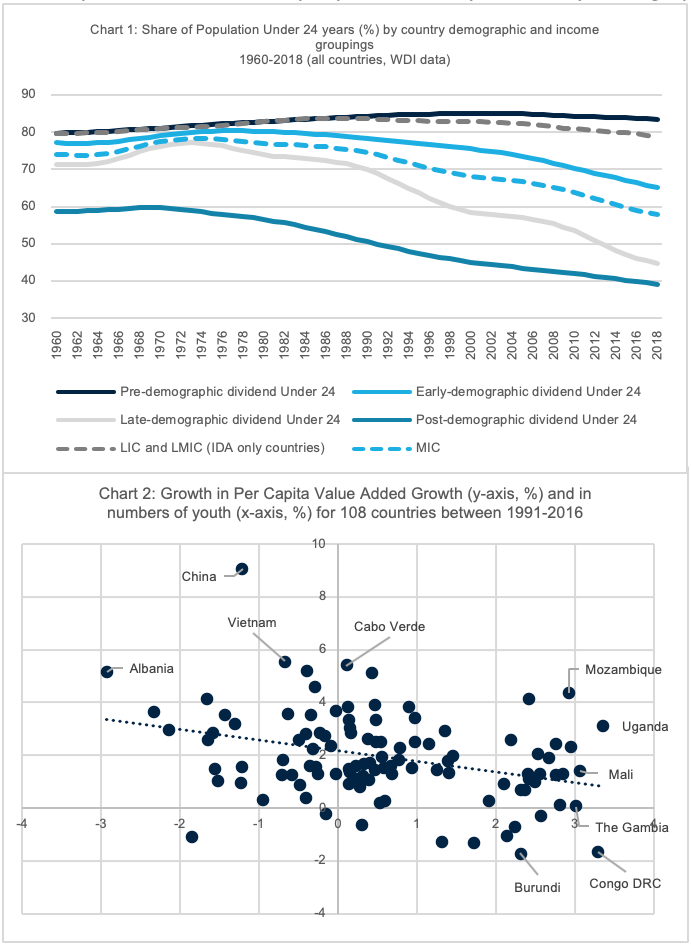 It also means that since their labor forces grow faster, youthful countries must save and invest even more to deepen physical capital per worker, which makes them dependent on resource transfers from abroad. Ceteris paribus, youthful countries must grow faster to create better, higher-productivity jobs because their labor force is growing faster. Some have done so, as chart 2 below shows, but the relationship between youthfulness and per capita GDP growth is negative.

Some countries that have grown consistently for the past 25 years have struggled to create better jobs for their youth once growth slows down. Take the example of Uganda, where the median age, at 16 years, is high school age. A recent report shows that during the period from 1991-2009, the country grew much faster than the workforce. However, between 2012 and 2016, the rapidly growing workforce (which grew at 4 percent per annum in 2016) eventually caught up with the declining 5-year trend growth in the economy. Poverty increased during that period, labor force participation declined, and the pace of structural change in Uganda (where 72 percent of youth join the workforce on farms) slowed down. 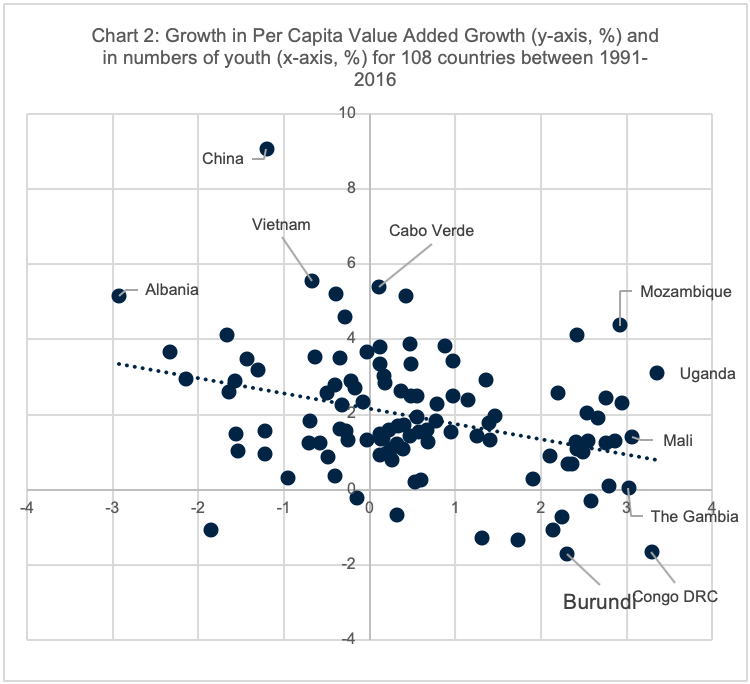 The reason youthful countries need faster economic growth for better jobs is simple. If GDP is rising at the same rate as the labor force, it is arithmetically impossible to increase the average productivity of employed workers without reducing labor force participation or reducing employment. If the share of workers in this scenario move out of lower- to higher-productivity jobs without an increase in output, the average productivity (and likely also the average earnings) of the receiving sector would be forced down. This phenomenon is known as a decline in `dynamic gains from reallocation’. As blog #4 noted, it is common in slower-growing countries, and in those with declining shares of waged jobs.

Importantly however, theories of demographic transition tell us that the policies that accelerate transition are not the same as those that accelerate GDP growth. Improvements in nutrition from better agricultural productivity, the emergence from subsistence, and better sanitation together reduce mortality. Improvements in education (especially female), urbanization and female labor force participation in response to the availability of good waged jobs, accelerate the reduction in fertility. Economic theory tells us that increased agricultural productivity and the accumulation of human capital kick-start demographic transition. The structural change literature and empirics tell us that income elasticity of demand, human and physical capital accumulation, capital deepening, technical change, and trade are important drivers, and that for LICs, agricultural productivity is key.

Chart 3: The shares of education in workforce (%, x-axis) and the share of unemployment amongst the active labor force (% y-axis) for older and younger countries

So, what do cross-country data tell us? The good news is that the average worker in youthful countries is becoming better educated (chart 3). In fact, considering the age group 15-24, young countries have a higher share of basic education. If enough educated youth join the workforce and find jobs commensurate with their education, youthful countries can accumulate human capital through rapid growth in labor. 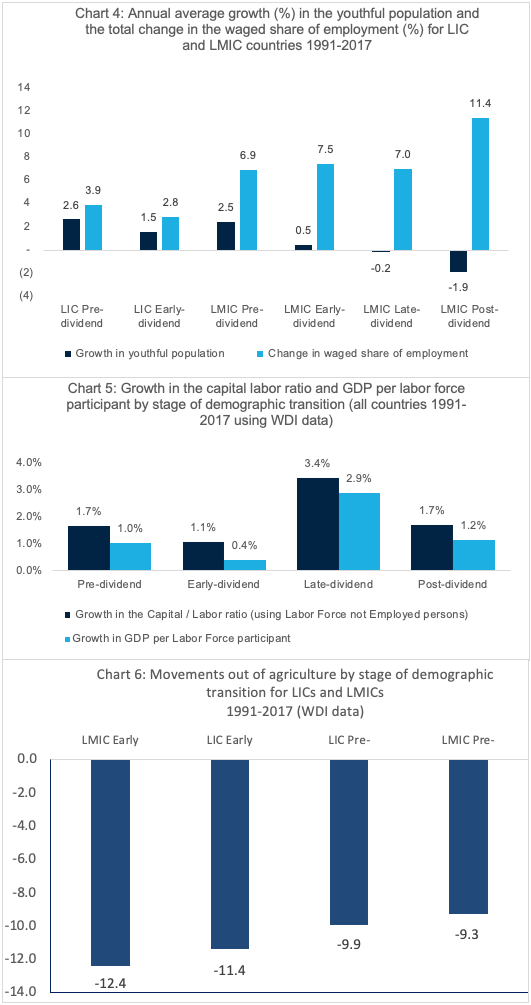 However, the unemployment rate is also higher in countries with young workforces (chart 3 right side), and as chart 4 below shows, within LICs and LMICs, waged employment is higher in those countries that are more advanced in the demographic transition.

Consistent with chart 4, chart 5 shows that growth in the capital to labor ratio and growth in the average productivity per available worker (per labor force participant) are both lower in the countries that are pre- or early-demographic dividend.

With the observation that unemployment is higher in young countries, these findings suggest priorities for youthful countries. To generate better waged jobs for their growing, more educated labor forces, youthful countries should pursue policies that deepen capital accumulation in wage-employing firms in their “modern” sectors of the economy. Policies to improve the investment climate, enhance trade opportunities in growing domestic and regional markets and abroad, and policies open to foreign investment can all help.

But there is another twist. In youthful LICs, most young workers join the labor force on their parent’s farms. In these countries, as we saw in the report Pathways to Better Jobs, the movement of labor out of agriculture correlates with improvements in productivity. Chart 6 shows that within LICs and LMICs, pre-demographic dividend countries had a slower reduction in the share of workers in agriculture than early dividend countries. Since both the reduction in mortality and the transition out of agriculture depend on farm productivity, this suggests that pre-dividend countries seeking better outcomes for jobs with structural change should first accelerate food productivity, and develop and integrate their food markets.