#8 Which Comes First – the Chicken, the Egg, or the Demand for Poultry Products? Engels Law and the Design of Jobs Strategies in Low-Income Countries (LICs)

In in blog #2 and blog #3 in this series we focused on the evolution of the sectoral pattern of production and jobs as countries develop. But new research suggests that changing patterns of consumption and net trade should also be taken into account when planning strategies for jobs with economic transformation in LICs.

In economic literature, structural change is normally measured in the changing shares of production, and employment as economies develop. But consumption shares can diverge from production and employment, because part of what is consumed might be internationally traded.

Consider a poultry value chain. When you buy a frozen chicken, you don’t just pay the wages and other input costs of the farmer that fed and raised it. You pay a share to the feed farmer (it may only be chicken feed, but over half of the value of chicken comes from what it was fed!), the processors, the transporters, the retailers, and possibly the advertisers and printers of the posters telling you it’s good for you! But when consumption goods are traded internationally, changes in consumption shares need not closely match changes in production and employment. If the frozen chicken was imported, you’d be paying for the labor and capital inputs of producers in another country, without affecting the structure of production and jobs at home. 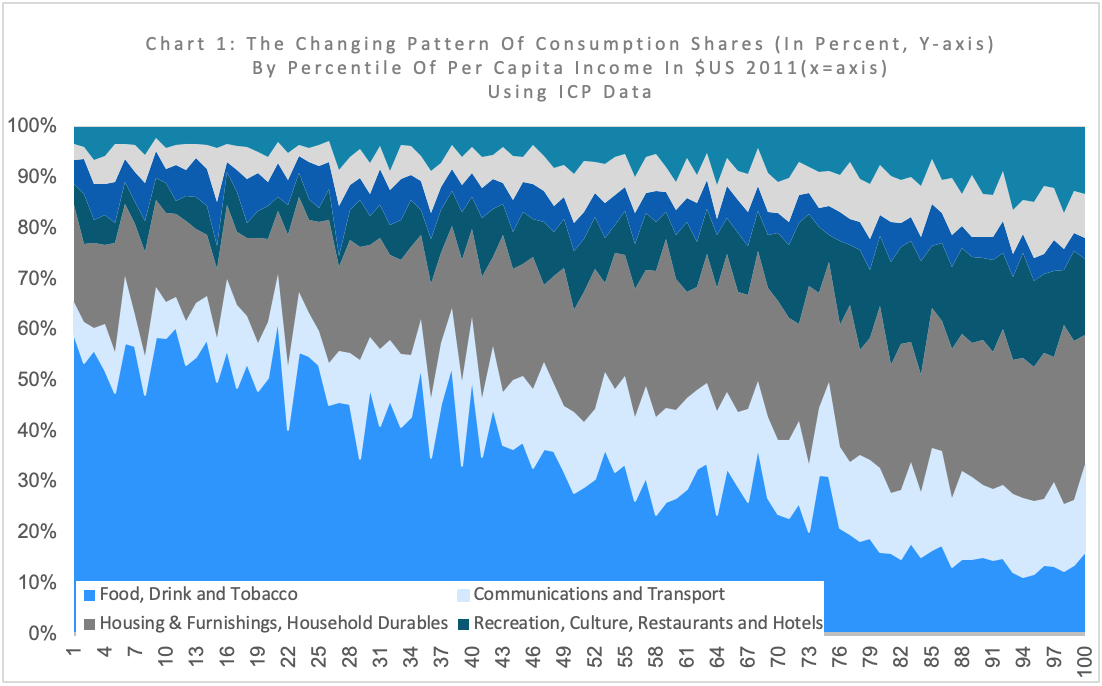 But our recent research shows that in fact, changing shares of consumption with per capita income are closely related to the structural changes in GDP and employment data for LICs and Middle-Income Countries (MICs) (chart 1). Taken from our forthcoming study, the chart uses two cross-sections (2005 and 2011) of data from the International Comparison Program (ICP) to show how shares of household private consumption vary with countries’ per capita income. The decline in the share in food and the increase in the share of services matches quite closely the changes in shares of production and employment. On average, in the lowest decile of countries, about 60 percent of national consumption is on food and drink, but this falls to below 20 percent in the richest quintile. As countries get richer, spending shifts to transport and motor vehicles, and housing and entertainment, with education and health also rising. We were surprised how close chart 2 (shares of consumption in food and drink) and chart 3 (share of consumption in services) are to the shares of employment in agriculture and services that we discussed in blog #2.

We sometimes talk about a Law in economics when we observe a stable empirical pattern. The statistician Ernst Engel observed that as income rises, the proportion spent on food falls―even if absolute expenditure on food rises (Engel’s Law). In other words, the income elasticity of demand for food is between 0 and 1. That observation motivated Pasinetti, Leon, Sraffa, and Kaldor to develop their theories of value and growth.

So, let’s come back to chickens…and eggs.

Detailed product data reveal consistent patterns due to income elasticity. The share in consumption of a basic good, unprocessed rice (chart 4), falls as per capita income rises. The share of income-elastic poultry (chart 5) first rises, then falls. The rise in demand for poultry products in LICs and Lower Middle-Income Countries (LMICs) is predictable as incomes rise. It makes viable private investment in poultry processing plants and large-scale hatcheries and `layers,’ which in turn has the potential to create better-quality rural jobs by linking small farmers to the value chain, including feed. Market demand for poultry and private investment come first, and then the chickens and the eggs!

What’s that got to do with jobs? The poultry example is just to illustrate that deeper thinking about market connectivity can lead to better jobs outcomes with economic transformation. This is important. Most Jobs Diagnostics in labor abundant LICs suggest that labor demand for unskilled and semi-skilled workers is too low. Most workers in these countries are on farms, and most youth start their working lives on farms. Jobs-rich transformations in these countries can be bolstered by commercial agriculture. Choices between alternative public infrastructure investments must take account of evolving urban and regional patterns of consumption so that more jobs get created through value chain linkages.

The demand for labor derives from the demand for goods and services. And, obviously, production supply follows consumer demand. The private sector takes account of market potential in every investment decision, and if market signals work, they will solve supply shortages. But they will do so in the most profitable way, to maximize the returns to capital. It is the role of public policy making to address infrastructure gaps and coordination failures, taking into account jobs potential and market potential.

In Africa, urban demand for higher value foods such as meats, dairy, fresh fruits and vegetables, processed foods, and drinks is already rising fast. Our analysis of consumption patterns with rising income suggest that in LICs, the World Bank, and the IFC should continue to factor the transformation in product demand and labor demand into investment choices for jobs and economic transformation.

Demand can grow through international exports. In a future blog, we will look more closely at some countries that successfully accelerated exports to generate more urban waged-jobs.